Welcome to another week of Travel Photo Thursday.  January has left us and February is rushing along. I’ll continue to enjoy the charm of Chiang Mai for the next couple of weeks. Last Sunday I visited several of the lesser known temples in Chiang Mai, and I want to share with you some shots from Wat Pa Pao.

On first glance, Wat Pa Pao looks to be quite an ancient temple. However, according to what I’ve read, this Shan temple was built in the 19th century by order of King Inthawichayanon. Located just outside steps away from Chiang Mai’s old city, and main tourist thoroughfare, it often gets missed in the rush of visiting the better known temples in the city.

The temple was quite busy when I was there last Sunday, but not with tourists. The locals were having some kind of gathering in the assembly hall. I’m not sure what it was, but I could hear the buzz as I wandered the temple grounds. The temple is a fine example of Burmese temple architecture, hidden away just off of the busy street. Unless you are looking for it, you could easily walk by without giving the Wat a second glance. Even with the buzz from the hall, it was easy to get “lost” in the serenity of the compound. The temple is named for the surrounding grove of pao trees. 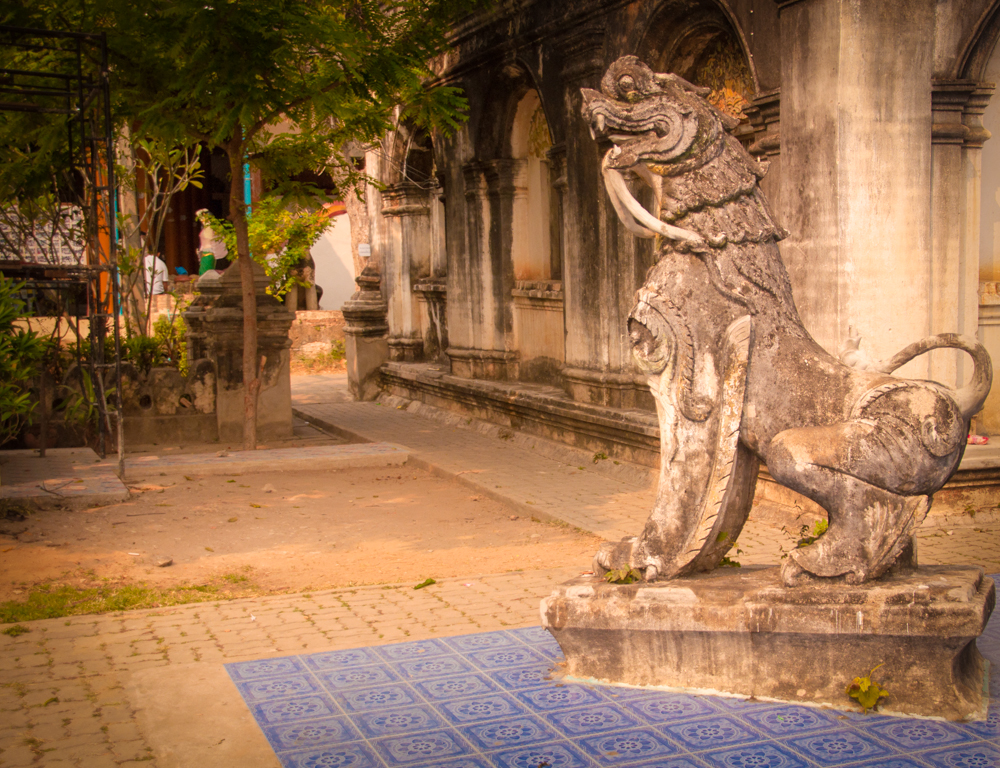 Entrance to the Chedi…

There are several of these entrances, and if you are more than five feet tall, you will have to bend over to enter. 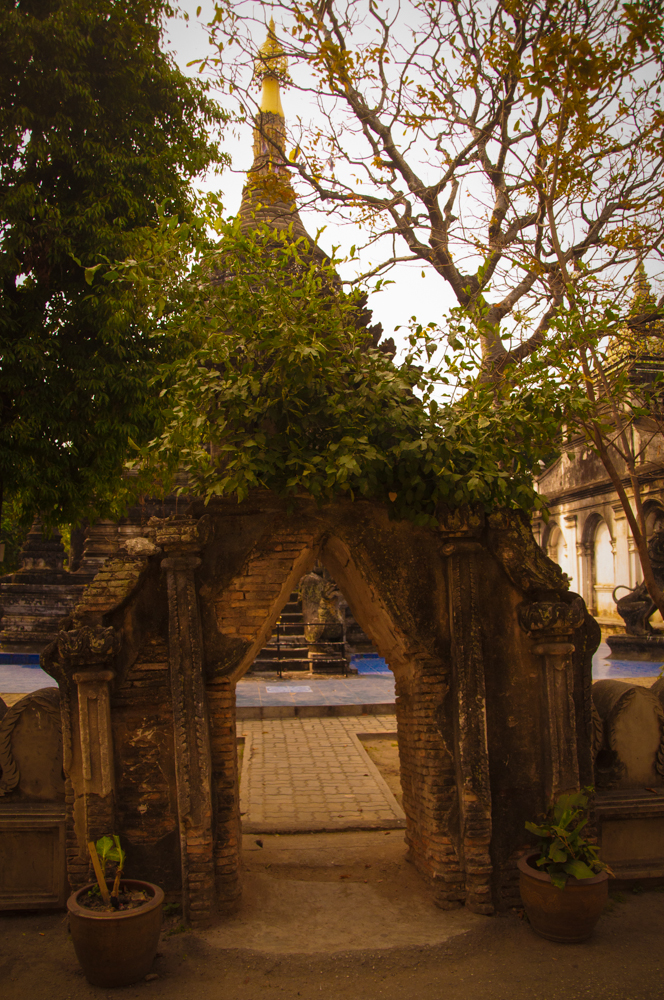 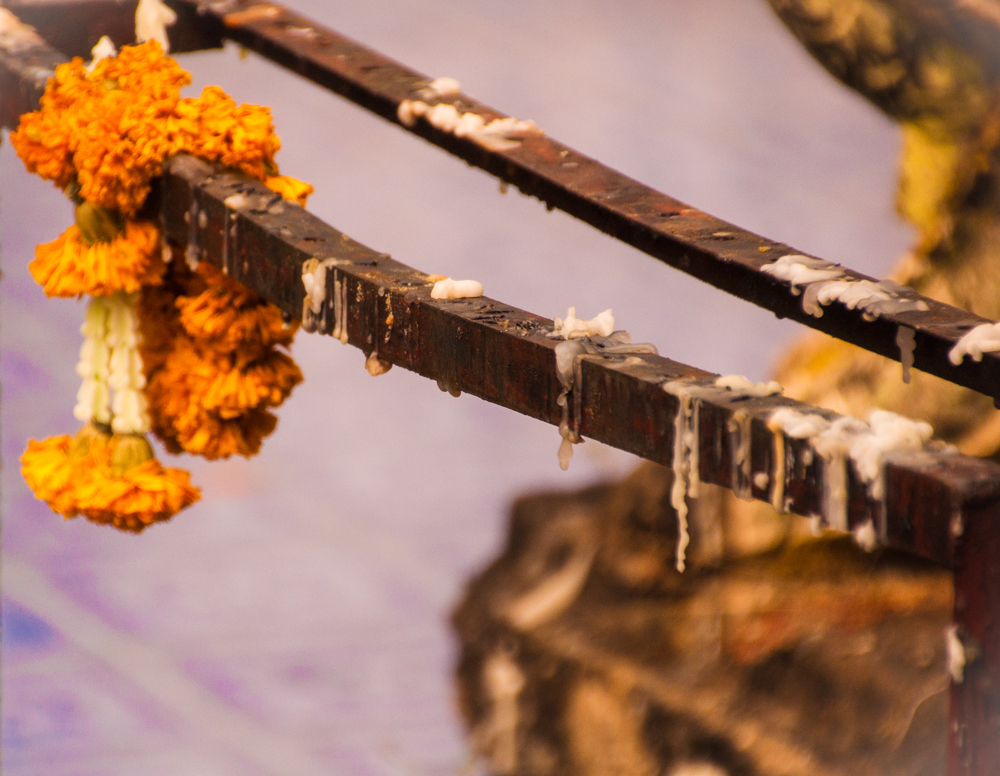 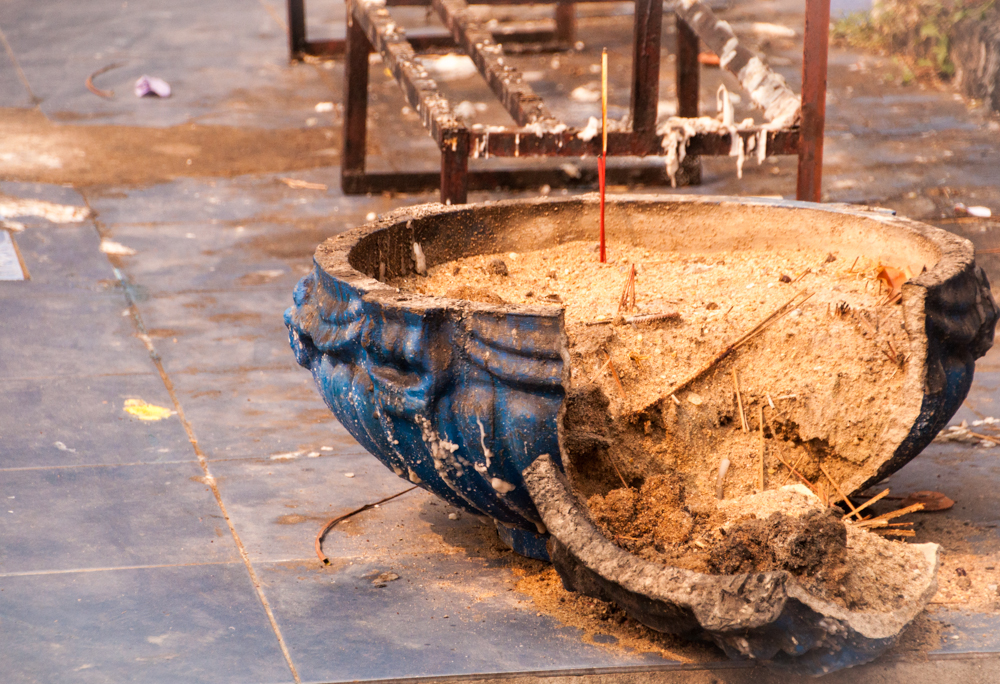 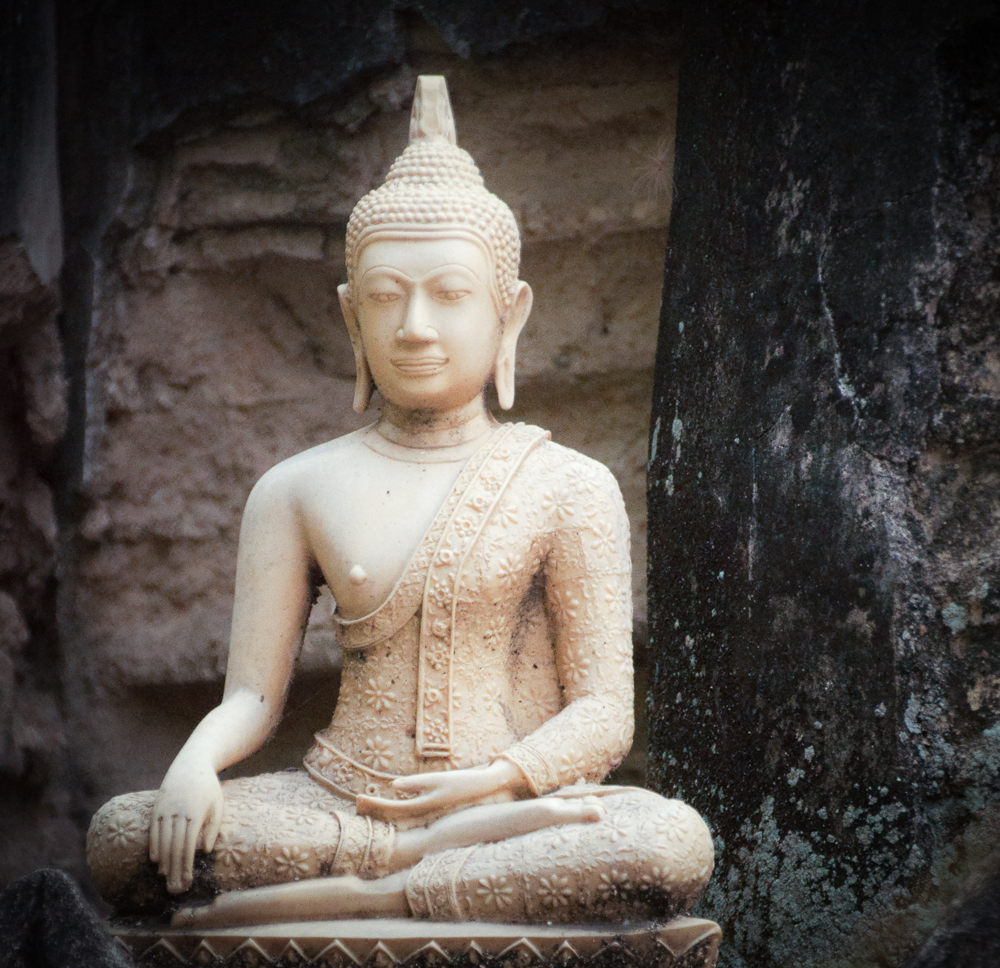 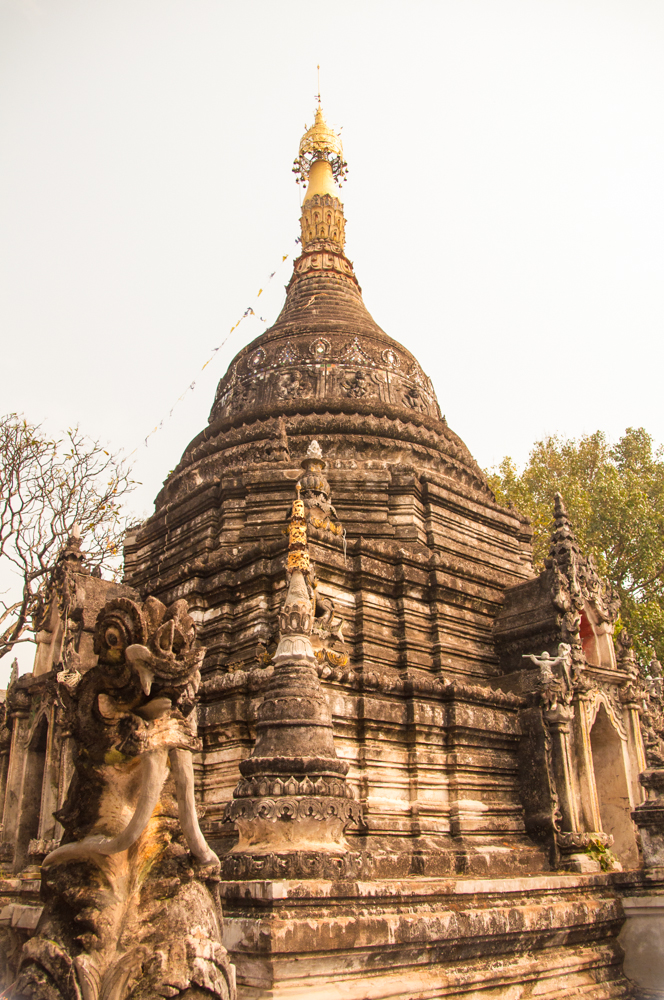 The Wat is home to a beautiful teak temple… 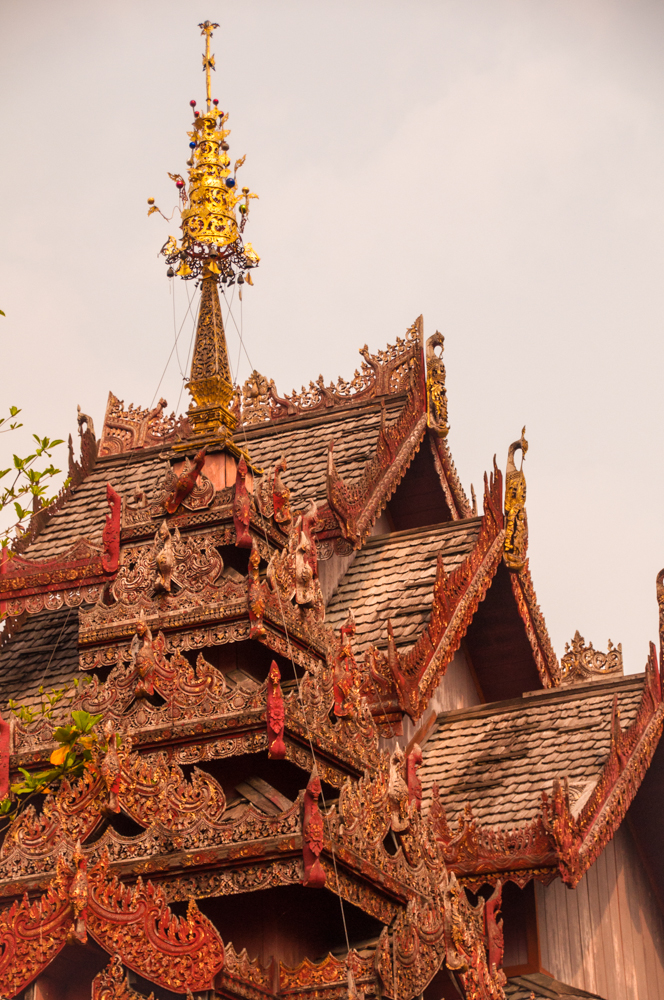 (Not open to the public, but pretty to look at.)

A bit of advice from the monks… 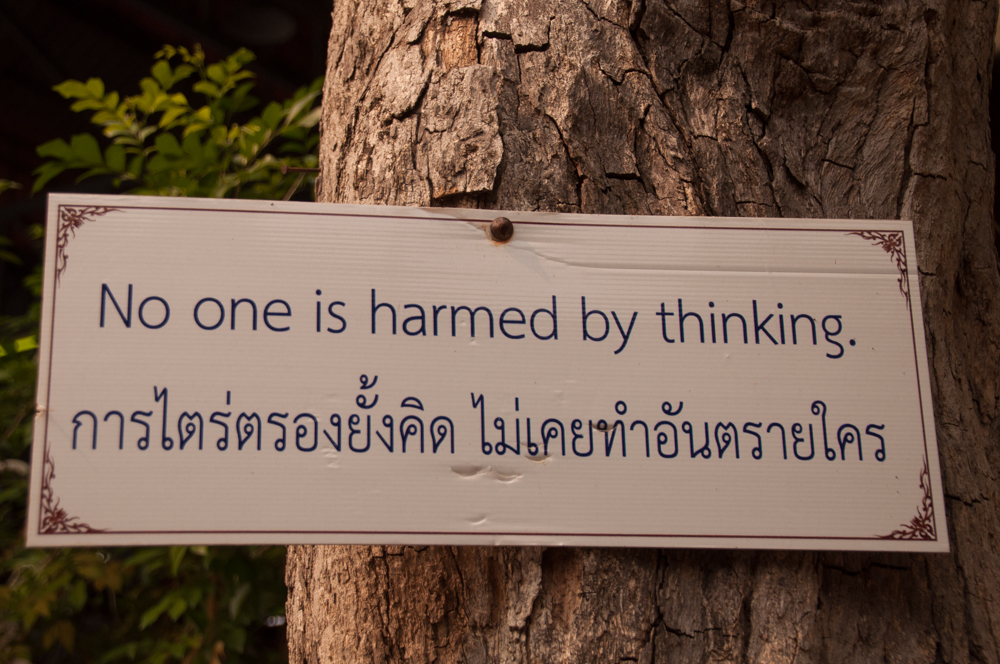 No monks or dogs were compromised for this photo essay 🙂 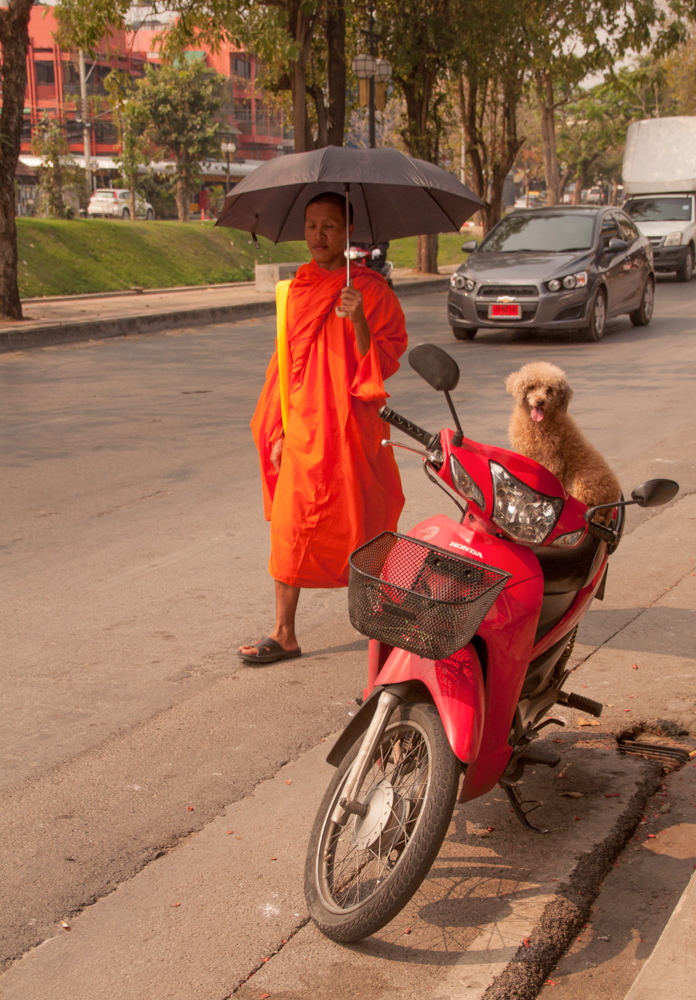 Wat Pa Pao is open daily from 6am to 6pm, admission is free

Located just outside Chiang Mai’s old city moat, the temple is a short stroll from Thapae Gate. Come through the gate, turn right, and walk about 6 or 7 minutes. Cross the street again and you will easily find the entrance to the temple.

Dress appropriately. That means shoulders covered and no short shorts, for the ladies; shirts for the men. Ladies, carry a shawl or scarf to cover your shoulders if you are wearing a sleeveless top. No smoking on the temple grounds.

You can find out more about Wat Pa Pao here. You will not find this temple listed on Trip Advisor. Maybe that’s one of the reasons it’s so peaceful 🙂

Food, culture, museums, architecture, the people, and unplanned surprises are what I love most about travel. Forty countries and counting.

Latest posts by Nancie (see all)

The tide is low on this gorgeous summer afternoons

The water Lilly’s are strutting their stuff. Mon