Welcome to the 154th edition of  Travel Photo Thursday. Enjoy our virtual world tour. Everyone is welcome to contribute their own travel photo post.

We are basking in a few days of lovely warm weather here. I hope it doesn’t go anywhere too soon. That doesn’t stop me from dreaming of summer. Enjoy this beautiful day at Peggy’s Cove last July. Forty artists painted around the Cove for two days at the Peggy Cove Area Festival of the Arts. All the art work produced was displayed prominently in a yurt especially erected for the event. Attendees bid through a silent auction. A portion of the proceeds went to the Peggy’s Cove Preservation Society.

I don’t know much about Nova Scotia’s painting scene, except that many painters are drawn to the province because of the spectacular ocean views. Peggy’s Cove has to be one of the most painted and photographed spots in the province (maybe in Canada). To bring 40 artists together for 2 days to do nothing but paint was a memorable event. I spent most of the day, and loved every minute of my time wandering among them and enjoying the art they were creating. Enjoy today’s photo tour…

Painting the beauty that she sees… 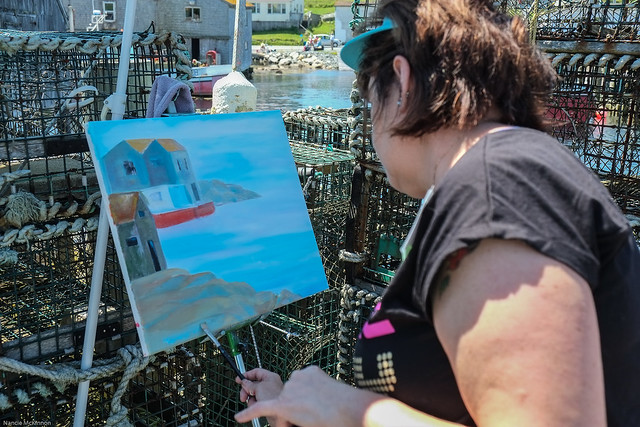 On the way to the yurt for display… 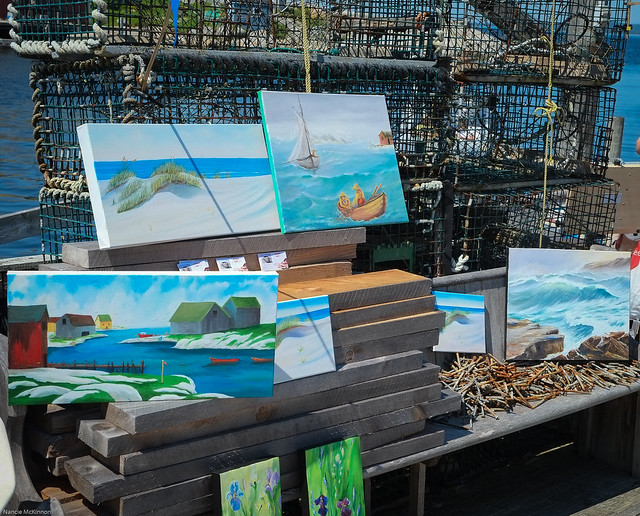 At work…(despite having to produce a painting (or paintings) by the end of the two days, all of the artists were friendly and welcomed conversation.) 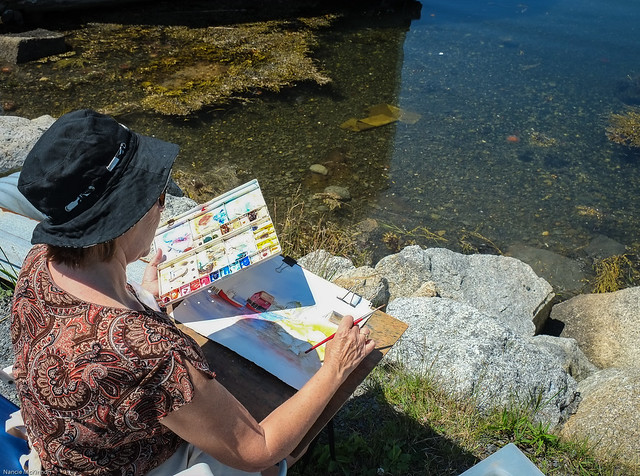 Meet local artist James E. Pay. We had a lovely conversation about learning to paint with water colors. When I asked him if he had a card, he gave me a type written mini bio. This is what it says…

“James E. Pay. SCA. U.A. Mentored by the late A. J. Casson, the last of living member of Canada’s famous Group of Seven, and studying under colourist Marjorie Smith, M.F.A., the artist developed his own style of painting in watercolour and acrylic. James is a signature member of the Society of Canadian artists as well as the United Society of Artists in the UK. He is a former vice-chair of Central Arts, Scotland and a founding member of the Acrylic Painter’s Society of Ontario. He now resides in Nova Scotia and paints maritime scenes and colourful florals. To know more about this international-known artist follow the link. “ 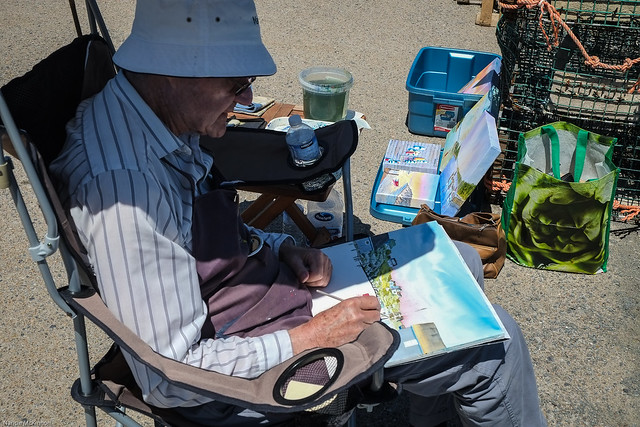 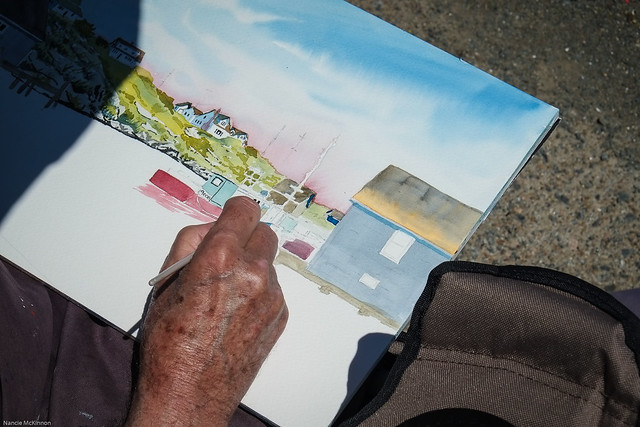 Some more of Mr. Pay’s works… 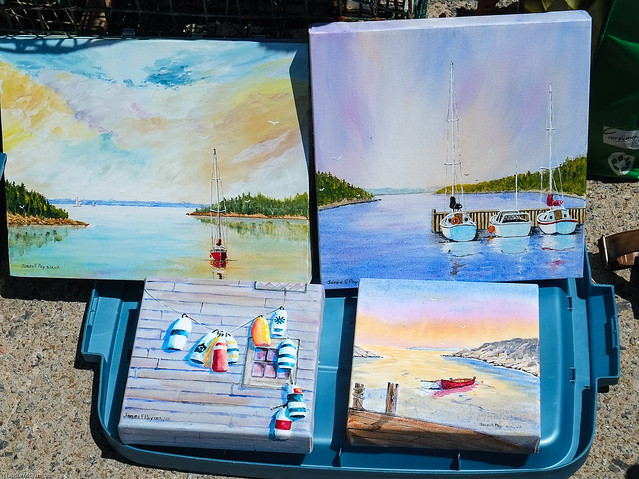 Painting the village at Peggy’s Cove… 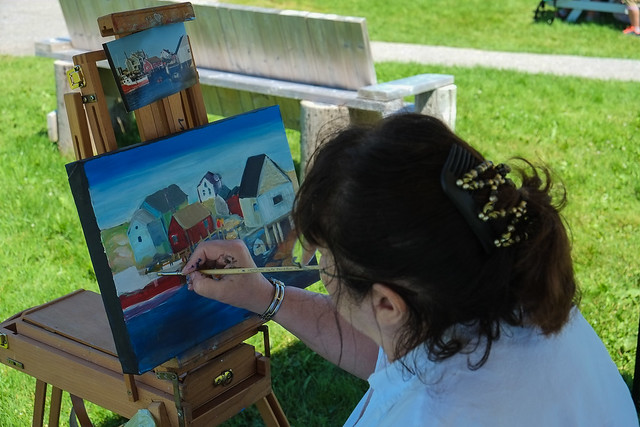 Painting the ocean and the lighthouse on local stone.

The finished art was for displayed for all to admire, and to purchase. Patrons bid on their favorite pieces via a silent auction. I wanted to buy a piece, but bringing it back to Korea would have been difficult. I opted instead to ogle each piece as I made my tour of the yurt. 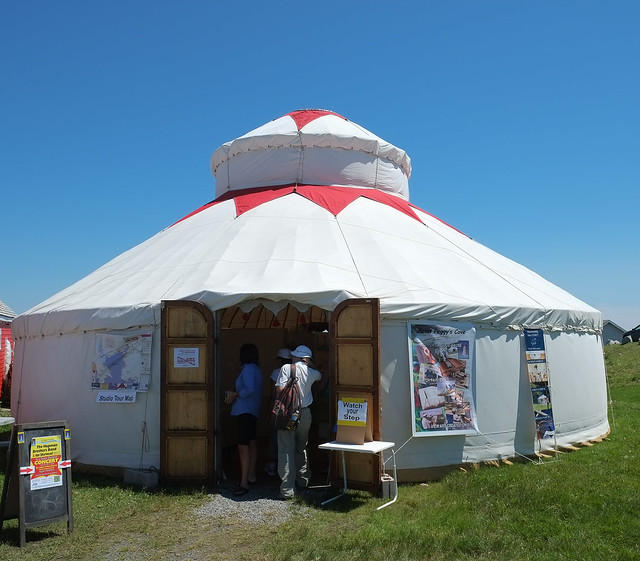 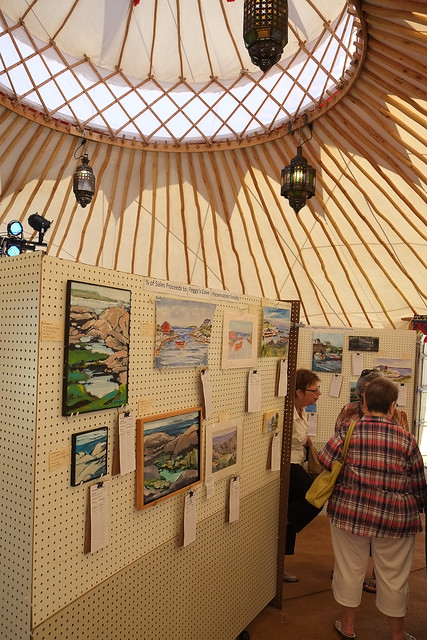 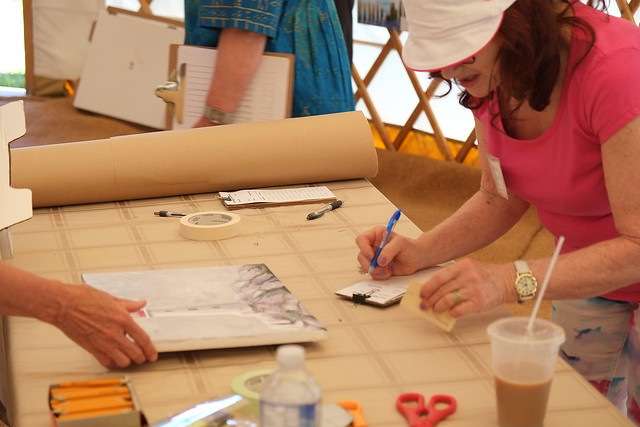 No trip to Peggy’s would be complete without a photo of the famous Peggy’s Lighthouse. I left the people in the photo to show how large she actually is. After visiting Peggy’s, I commented to my Dad about how great the lighthouse looks. He laughed, and told me that it had just been repainted by the locals. The Canadian government is no longer maintaining lighthouses. However, if I understand correctly, the provincial governments have not been given the funding to maintain them either. This puts their maintenance in limbo, and without the local Peggy’s Cove community intervening, the Peggy Cove lighthouse would have been a real eye sore this past summer. I applaud the locals. However, our government should be ashamed.

Peggy’s Cove is a quick 4o minute drive from Halifax. Although you may find yourself stopping along the way to take photos of the gorgeous ocean views. Check out this website for directions and other useful information…Peggy’s Cove Coastal Region.

Mark your calendars…Next year’s Peggy’s Cove Festival of the Arts will be held July 10th to 14th. Check out their website!

The festival is free. If you arrive early, you’ll find lots of free parking at the visitor’s center.

This is the 154th edition of Travel Photo Thursday. You can browse the archives here.

Coffee with a view this morning. #Annapolisroyal #