Through the Sandbox Travel Lens #53 — An Enchanting Burmese Puppet

Adorning my apartment wall is a Burmese puppet purchased from a puppeteer  who performs in his living room at beautiful Inle Lake, Myanmar. “She” is definitely one of my favorite souvenirs from my travels, and at about $5.00US, one of the least expensive, and well within this traveler’s budget. However, I digress; that’s not the reason for this post. Imagine my excitement when I learned that there was an international puppet festival in Chiang Mai on my last weekend in the city. Entitled “Asean Enchanting Puppets 2013”, the festival showcased puppeteers from the ASEAN bloc countries.

The first evening featured Thailand, Laos, and Myanmar. Who could resist free food and drink, and some great puppeteering, which included Myanmar?  I was there like a dirty shirt, with my camera ready to go. I’m calling this post a tease, because when the semester ever settles down I want to share a whole lot more, including the puppet hanging on my wall. This is one of my favorite shots of the Myanmar puppets. Isn’t he gorgeous? 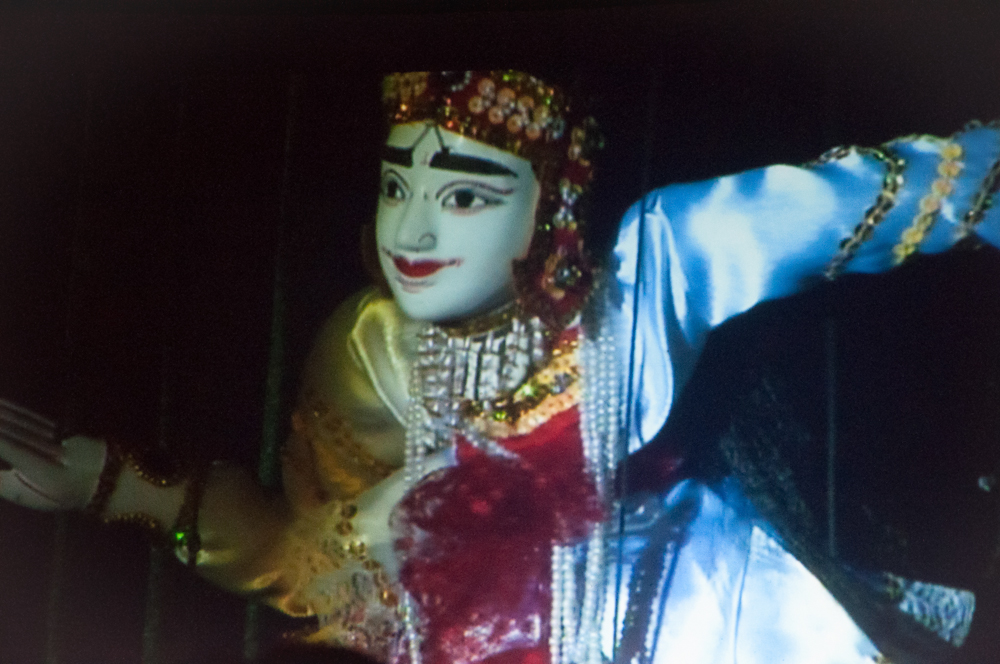 If you would like to see more puppet magic, please check out my Flickr photos of the water puppets performing in Ho Chi Minch city taken a few years back.

This was a three day event, and was totally free. That included the opening night featuring delicious Thai food and your beverages of choice. That is one of the fabulous things about Chiang Mai. There is always something going on, and quite often these events are complimentary. The key is how to find out about them. First, keep your eyes open. There are often posters around town advertising gallery openings, and other free events. I found out about the puppet festival from a billboard, and they also do some promotion at the weekly walking markets in Chiang Mai. One of the major places to check out is Thapae Gate; one of the main gates to the old city. These events are not always publicized in English, but if you see a stage being erected chances are an event is imminent. Most events start early evening. There are also a few places on the web where you can find out what is happening…

I Love Chiang Mai (Facebook Group)…informal group of travelers and expats in Chiang Mai. This is a great place to ask questions to find out what is going on in the city.

and finally, chat up other travelers; somebody always knows about something that is happening somewhere in the city!

Have you ever been enchanted by performing puppets? You can leave a comment below 🙂

In case you missed it,  the shot in this post was taken at a “surprise” free event at Chiang Mai’s Thapae Gate.