Welcome to Week 254 (11/12/2015) of Travel Photo Thursday. The semester is flying along, and I cannot believe that in just a little over a month I will be jetting off to Spain and Portugal! Until then, experiencing all the traditional Korean food that Seoul has to offer is still high on the list. Last Saturday I had the pleasure of attending  another awesome Hansik meetup. Our previous meeting had us savoring delicious Kimchi Jjigae  (spicy Kimchi pork stew) ( (김치찌개) served up at Gwanghwamun Jip in downtown Seoul. You can check it out here.  Last Saturday nights dining adventure saw us again in downtown Seoul, featuring a totally different traditional Korean dining adventure.  We met outside of City Hall Station, Exit 7, and it was a short walk to Wonjo Halmoni Nakji Center (“Original Grandma’s Octopus Center”). Established in 1965, it owns the bragging rights to being one of the oldest nakji bokkeum restaurants in Korea. If you haven’t figure out yet what nakji is, think octopus. Koreans love the stuff!

Remember to leave your link and comment at the end of the post. Magic will happen. Guaranteed!

Our host, Jason, provided a bit history on both the restaurant, the food, and the owner…

The owner/grandmother who created the dish, Park Musun, made history with her spicy stir-fried dish and spawned endless copycats near the old hotspot in Jongro called pimatgol, or “food alleyway.” But with urban development and modernization, that area has been revamped with new businesses and they’re now located in Bukchang-dong.

Halmoni Park Mu-sun, the original creator of the spicy ‘Mukyo-dong-style’ pan-fried octopus back in the mid-60s. Unfortunately, she is no longer with us as she passed away this year from natural causes. Check out her photo.

The dish Jason is referring to is nakji bokkeum (spicy stir-fried octopus). We were served both the original, and a less spicy version.

Our dinner, lounging in the aquarium at the entrance. 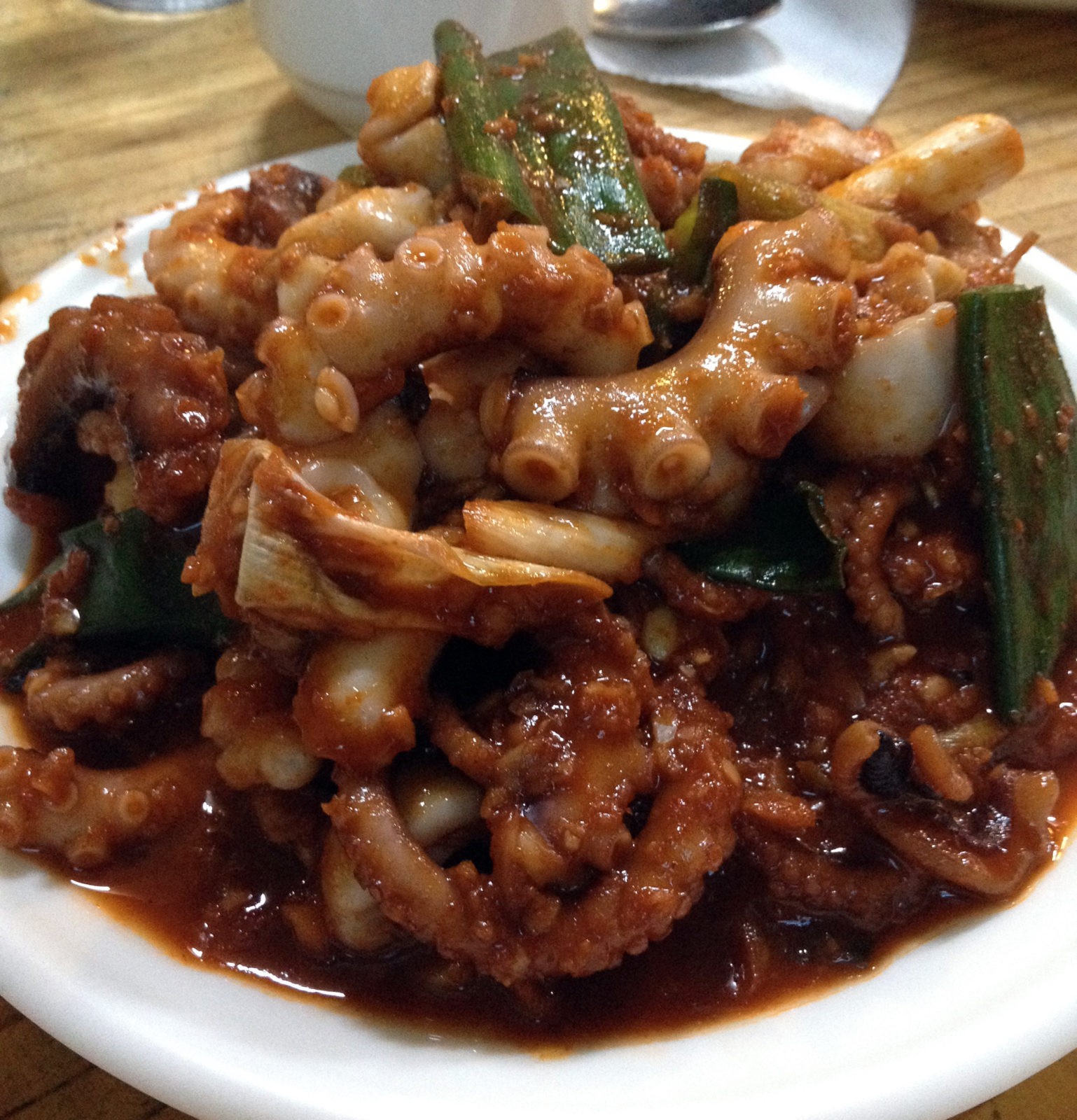 There’s more! We were also   treated to a plate of sannakji: raw octopus that is dead but still squiggly on the plate and in your mouth!  I must admit I was a little nervous about having an octopus doing back flips in my mouth, but when in Rome.

Note the eye balls, and I did draw the line there. No eyeballs got eaten by me!

Getting ready! Dipping it into sesame seed oil definitely helped! He was lively, and it took some chewing!

The spice of the nakji bokkeum was  slightly tamed by mixing it with rice, and other side dishes. 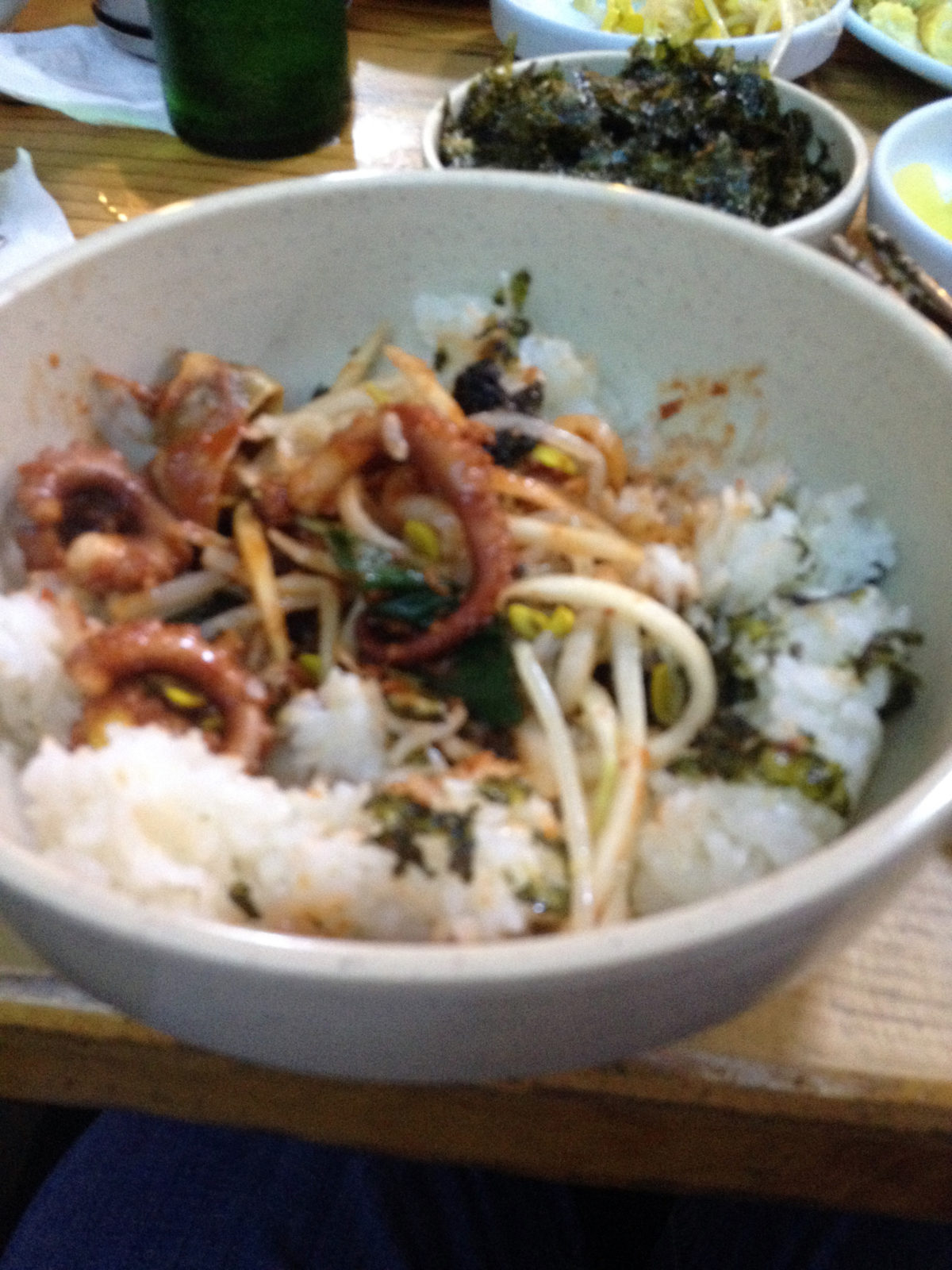 Open Daily from 10am to midnight.

Watch me eat that squiggly fella! A big thanks to Will at SeoulWeaver.com for the video. (Be sure to check out the movement and the eyeballs!)

Have you ever tried octopus, raw or live? Would you?