This week we are roaming around the Korea DMZ, that swath of land that separates North Korea from South Korea and came into being when the Korean War Armistice was signed way back in 1953. Welcome to Week 332 (6/8/2017) of Travel Photo Thursday. Join me on a tour of the North-South divide in photos.

To join in the Travel Photo Thursday fun simply choose a travel post from your blog.

Add a link to Budget Travelers Sandbox in your post. You can also add our Travel Photo Thursday logo.

You’ll find the code in the sidebar. Return here and place your link in the Mr. Linky at the bottom of this post.

I do read each one and always try to respond.

Finally, take the time to visit some of the other bloggers in the link-up. Reading, posting, and sharing is what makes the link-up successful, and ultimately brings more traffic to your blog.

All links are DoFollow. That means I am sharing SEO link juice with you; a good thing!

I initially took this tour back in 2001 or 2002. I know it was before digital cameras (or just before they came to market). I did take photos that day, and I had them developed, but they’ve disappeared during one of my moves over the years. I was anxious to see what was still the same and what had changed, and if I can still brag about having a good memory!

I am always surprised that the DMZ is only an hour outside of Seoul. This is why we foreigners get a little antsy when the big guy up North starts his sabre rattling. Our first stop of the day was the Imjingak Unification Park,  in the city of  Paju on the banks of the Imjin River. 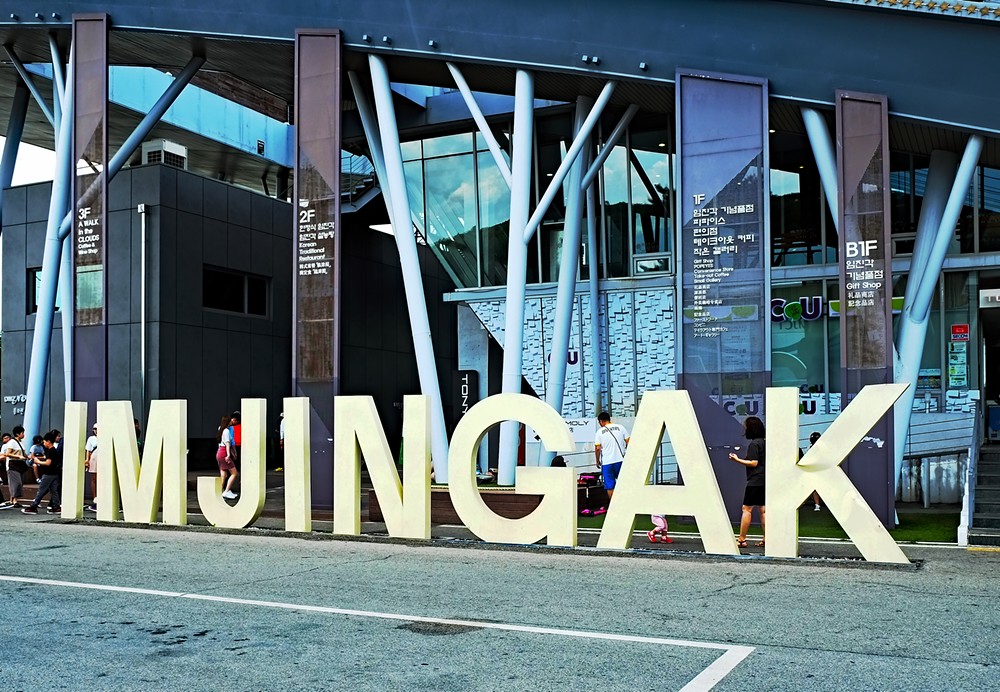 The first thing I noticed in this area of the Korea DMZ is there were no guards in sight. This was a very different scenario from the last time I visited. I’m sure the guards still exist, but they’re probably in a room somewhere watching on closed-circuit TV.

The wooden bridge in this photo is the Freedom Bridge. This is the bridge South Koreans crossed after the war when returning from North Korea. Now, you can walk along for a short distance before you come to a barricade. 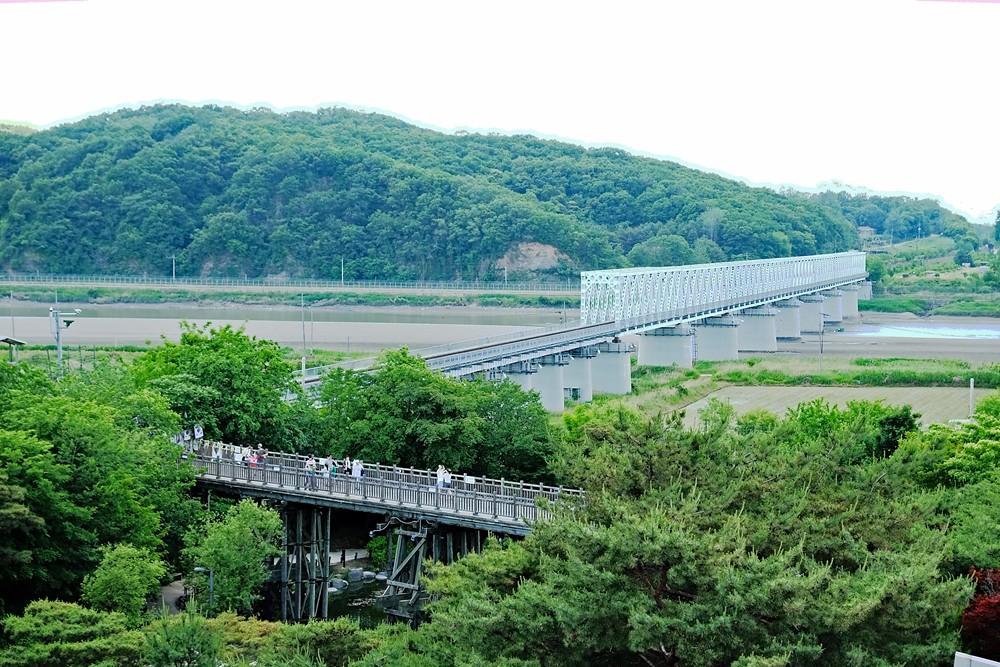 Directly in front of the observation deck is the Gyeongui Train Line which was destroyed during the Korean Conflict in 1950. Visitors pay a small admission charge of about $2.00 US. to see a railcar that was destroyed during the conflict and is now a Cultural Asset. I don’t remember this display from my last visit, and perhaps it was added since 2002. 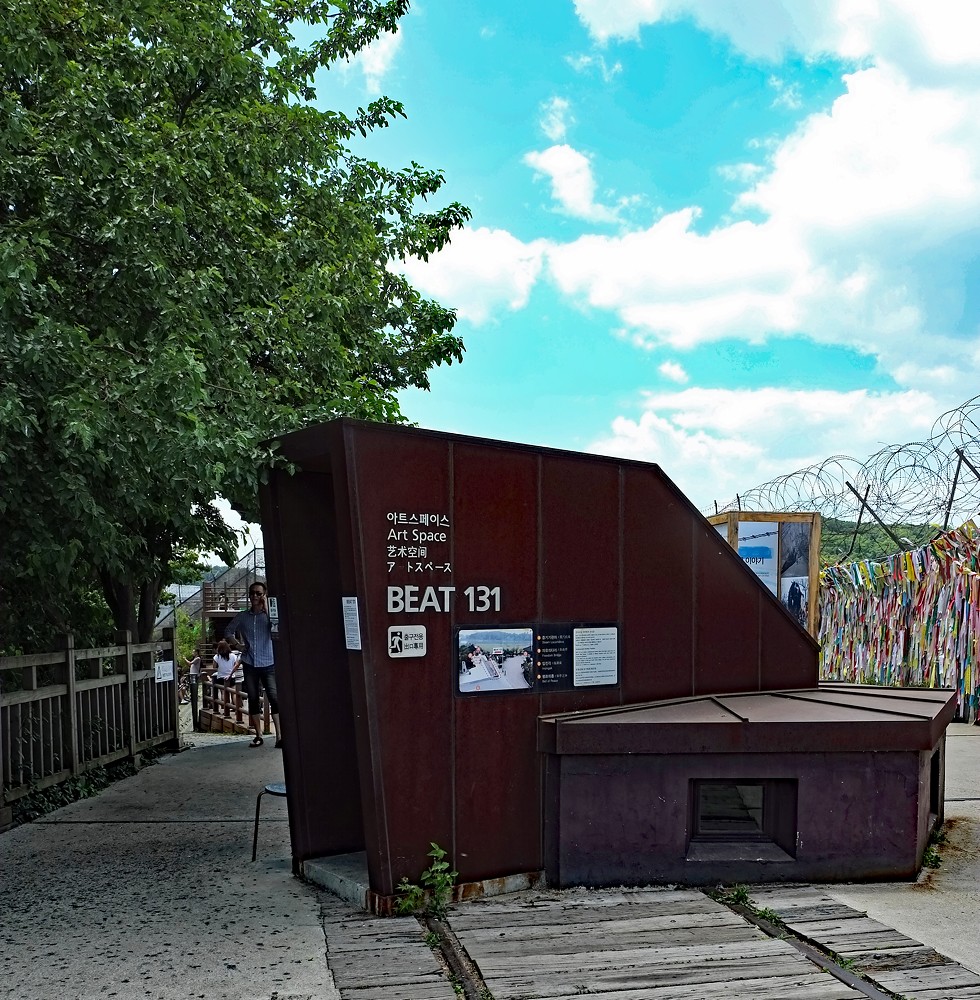 Peace ribbons and barbed wire are a little eerie. Minus the wire, this reminds me of the peace ribbons in Hiroshima. 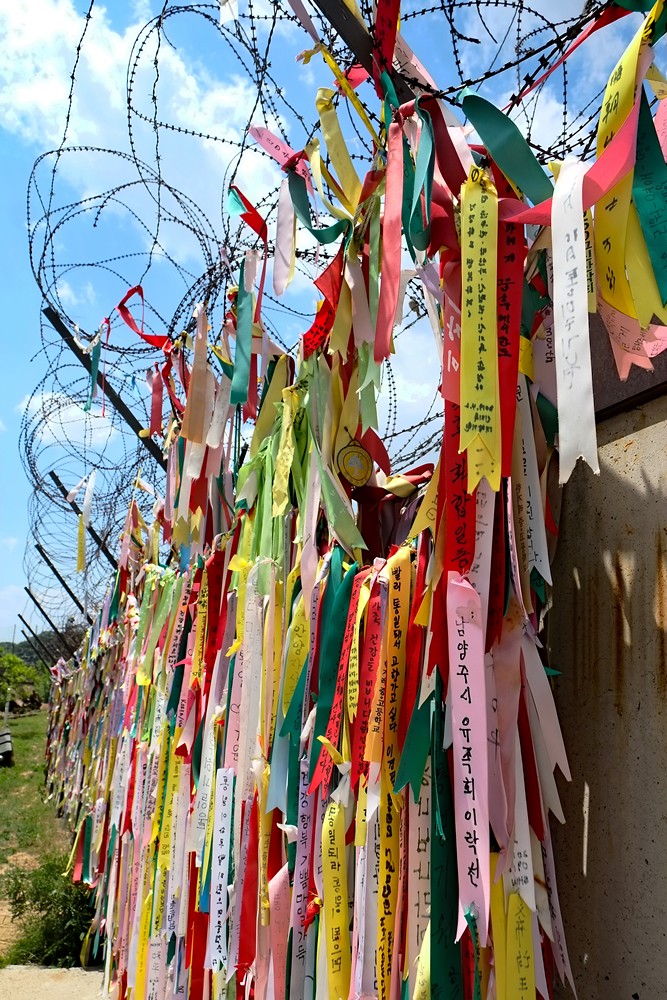 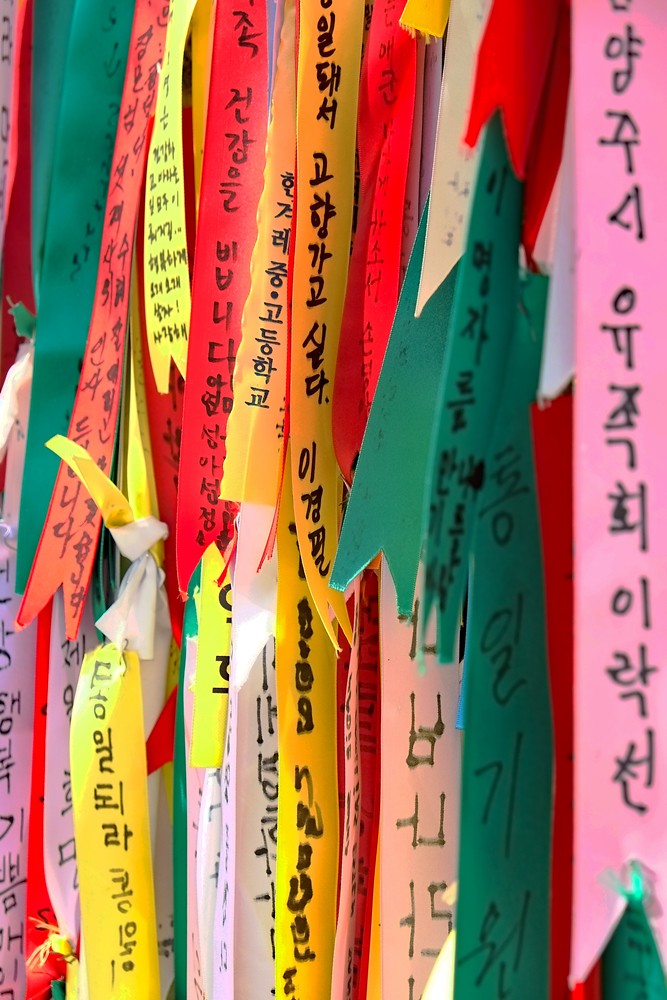 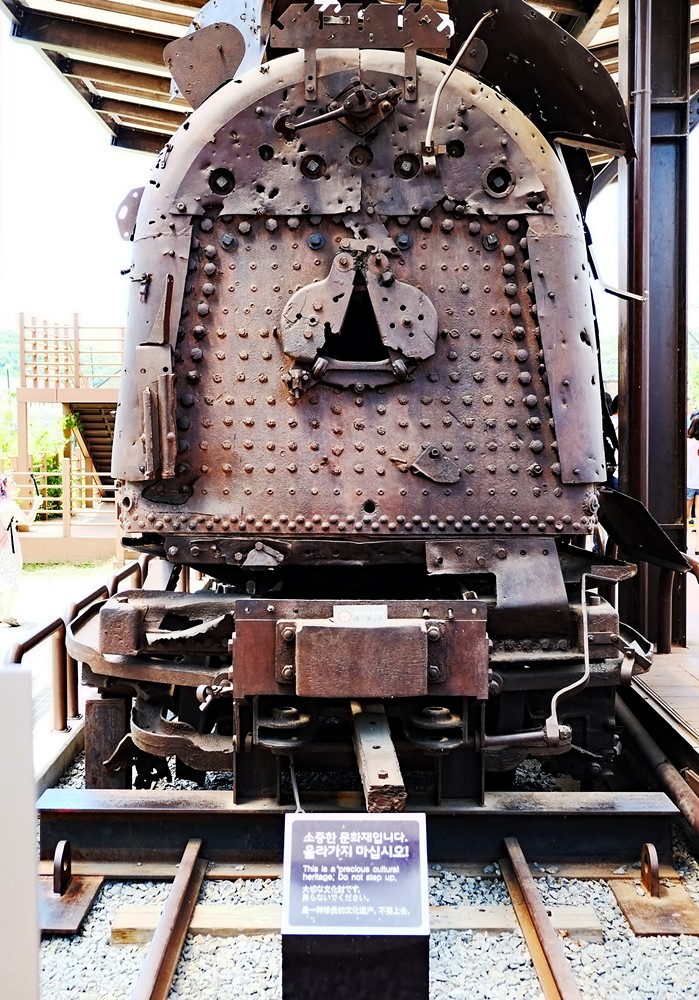 There are also monuments, war equipment, and photos depicting the Korean conflict in various locations at Imjingak. To be honest, I have seen so many war displays over the years I don’t pay much attention to them these days. For me, it’s being able to look out across the Imjin River knowing that land I see on the other side is forbidden (weird eh?).

Our next stop was the 3rd Infiltration Tunnel. Discovered in 1975, this is the third of four tunnels discovered under the border between the North and South. Built by the North Koreans, it’s primary (and probably only purpose) was to invade the South. 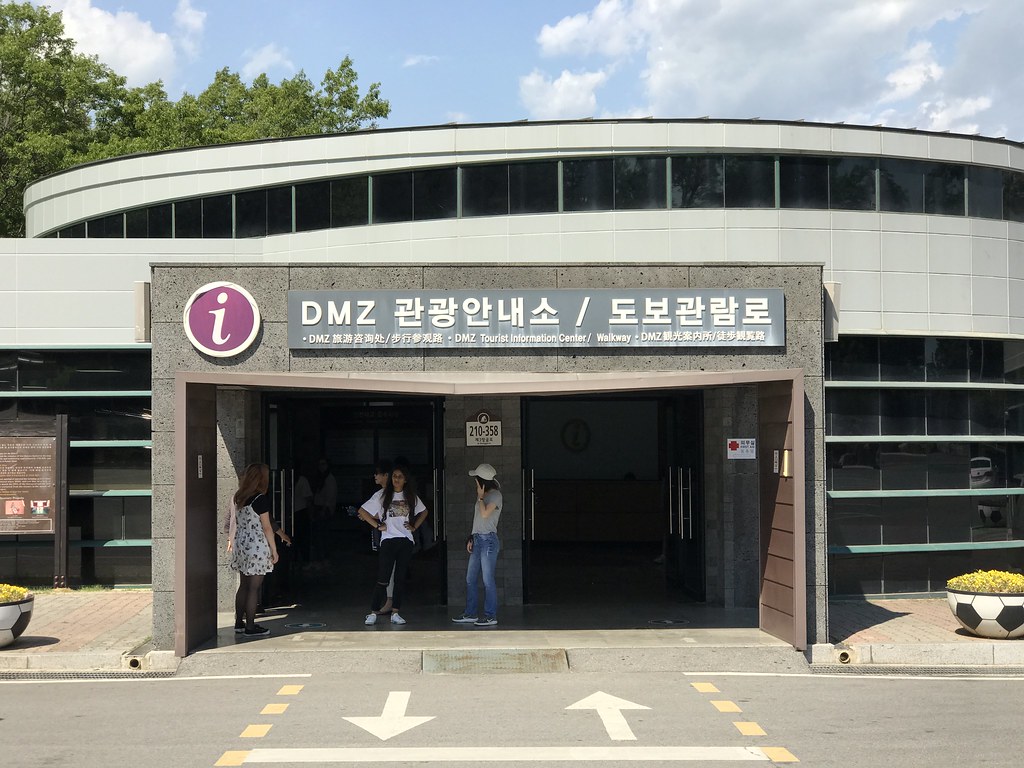 Entering this building takes you to the tunnel walkway. No cameras or cell phones are allowed. It takes approximately 10 minutes to walk to the end of the tunnel where you can look through a small cutout window into a North Korean bunker. Check out this link for photos and how the tunnel was discovered. The North Koreans painted some of the tunnel walls to look like a coal mine (sneaky, don’t you think?) Oh, and I was happy for the bright yellow construction hat. I managed to crack my head not once but three times during our little stroll.

The last time I was here if my memory is serving me well, visitors rode a rail car down into the tunnel and only walked the last 4 or 5 minutes. Also, at the end of the tunnel, and the closest point to North Korea, visitors came face to face with a North Korean soldier.  I remember that well, and it was exciting and a little scary to be so close to this ramrod straight guard with a gun in his hand.

Then it was on to the Dora Observatory with excellent views of North Korea and the Korea DMZ.  On my prior visit, there were lots of guards around, and you could only take photos within in a restricted area. The guards are no longer visible, and visitors can click way from anywhere on the observation deck. If you’re ever on the deck looking out at North Korea and you think you’re being watched you are right. Within minutes of our group’s arrival, loud music was wafting from the North Korean side. The regime wants visitors to know they know that company has arrived. 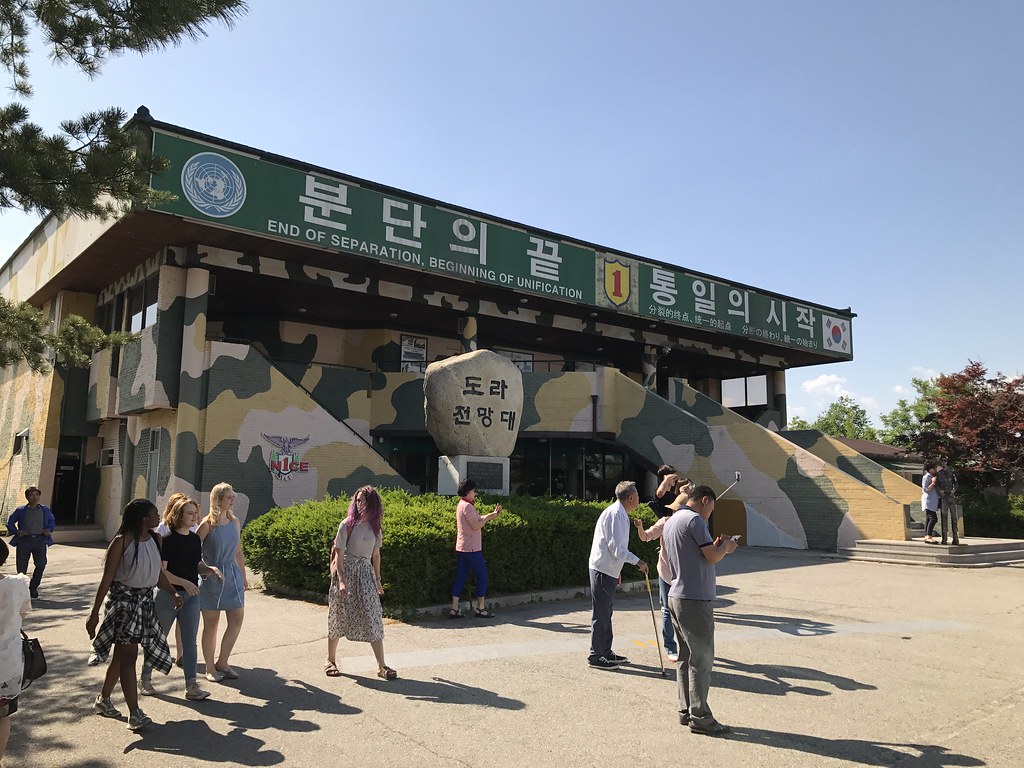 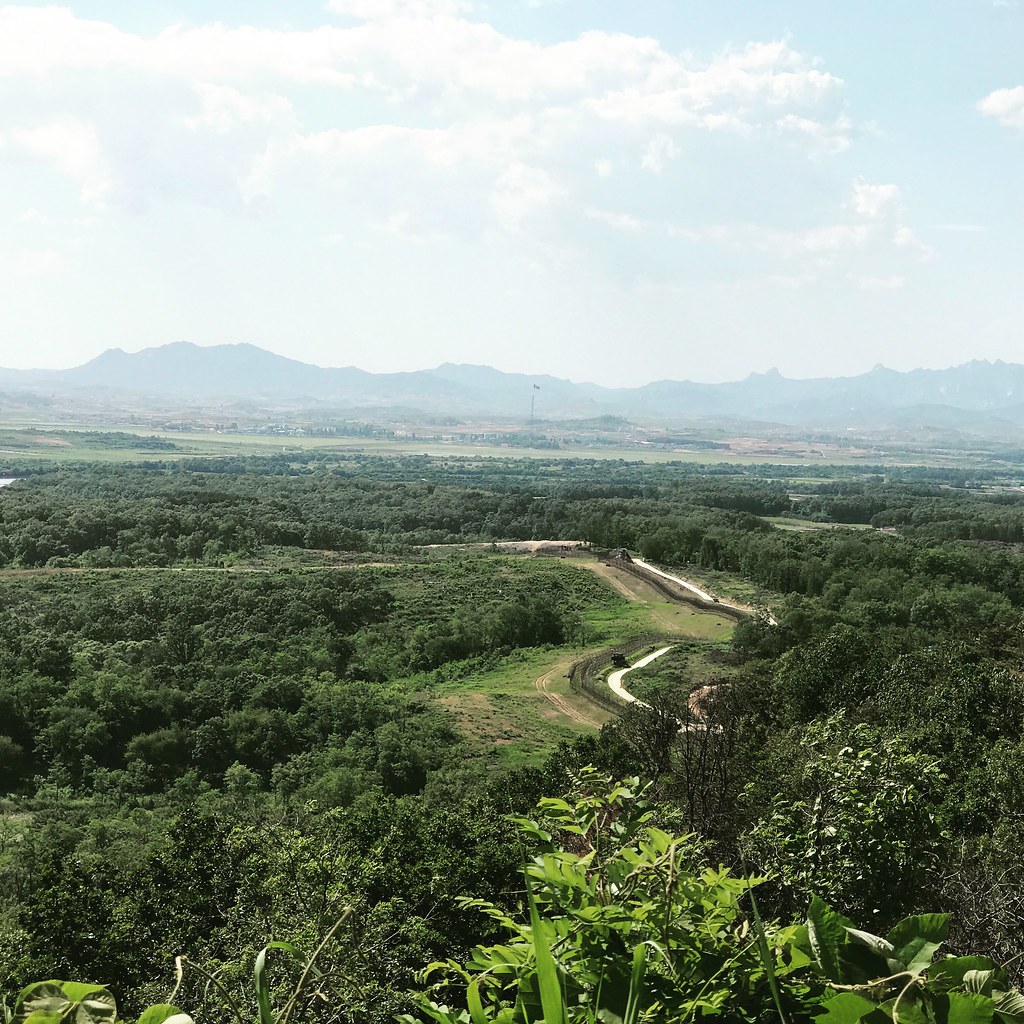 Our final stop of the day was just a short ride away at the Dorasan Train Station.  These tracks could eventually open up a route from South Korea through the North and end in Russia. Right now the tracks are empty, and the only sign of life inside the station is the souvenir shop. This is another spot where the last time I was here there were loads of guards. There’s not one in sight these days. I even remember getting into trouble here with my camera. I took a shot facing North Korea, and back in 2001/2002 that was a huge NO NO. 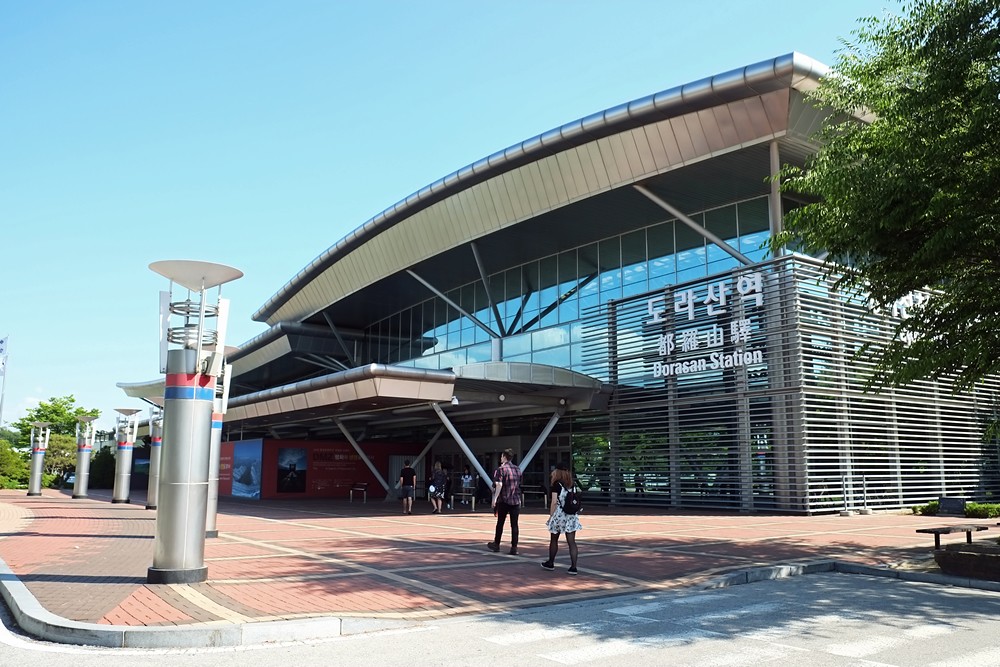 This trip to the Korea DMZ left me feeling both empty and frustrated. In the years since I’ve visited a lot has changed, but the situation between the North and South is fundamentally the same. The countries remain technically at war, and the North Korean regime seems intent on continuing the conflict. (IMO) unification remains a long way off.

Have you been to the Korea DMZ, or would you visit if you had the chance? Let us know in the comments.

This tour was organized by Seoul Hiking. If you’re looking for a well-organized budget-friendly tour, this is it.

Previous Post: « National Museum of Korea: A Photo Essay
Next Post: Canada 150: A Song, A Video, and Some Photos »